Revival of Imperial Prague in Leiden 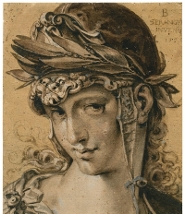 The University houses many exceptional treasures from the time
of Rudolf II. Bartholomeus Spranger, Aegidius Sadeler and Pieter
Stevens are represented with beautiful drawings and prints.
Particularly spectacular are the large engravings designed by
Adriaen de Vries. Manuscripts and books highlight the central
role that took science in Prague and shed light on the links
between Prague and Leiden. Alchemical manuscripts from
the library of Rudolf II, that came in possession of Leiden
University via a detour, have been rarely exhibited before.

Greatest patron of his time

In 1583 Rudolf II, Emperor of the Holy Roman Empire, moved
his capital from Vienna to Prague, which then developed into a
center of culture and science. Rudolf II was one of the greatest patrons of his time. Artists from all over Europe traveled to Prague to offer their services to the emperor, including Bartholomeus Spranger, who was responsible for a new court style which exerted its influence across Europe. Also in science Prague became a major center. Scholars of international fame, such as Tycho Brahe and Johannes Kepler, found work in Prague. Rudolf II also had a special interest in the occult sciences.