On January 13, Prof. mr. Rick Lawson, dean of the Faculty of Law, handed over to Prof. mr. Carel Stolker, Rector of Leiden University, a binding with rare law disputations. The book is a present of the Law Faculty to the University on behalf of its 440th anniversary (1575).

The gift regards a collection of 74 printed disputations, delivered by Leiden law students in the earliest years of the University, between 1596 and 1604. Leiden University did not possess any of these disputations, in fact none of them was hold in the Netherlands. Three copies were even unknown in the whole world.

The collection of disputations, bound together in one volume, was offered by an
antiquarian from Barcelona, and could be acquired in time after a tip to the Special Collections Department of the University Library. Anton van der Lem, curator of rare books: “It was already on the international Book Fair in Boston, and it could be only a matter of time before a wealthy American would grant it to Harvard”. By the intervention of Dean Lawson the acquisition could be realized thanks to the financial support of the alumni of the Faculty of Law. 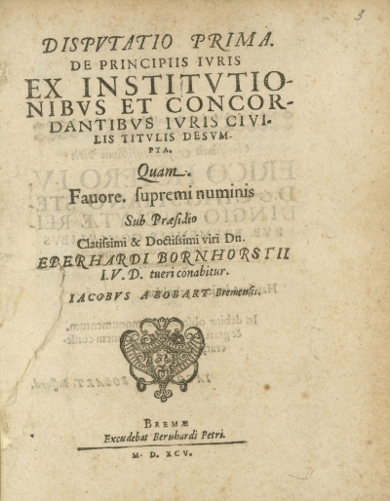 Far into the eighteenth century the disputation
was an essential part in teaching law. In
a disputatio students defended juridical theses,
supervised by a professor, to the opposition by
other students. The texts, also called disputations,
give us an insight in how students were educated
in those years. According to Margreet Ahsmann,
professor in administration of justice, to dispute
on the base of theses, could be regarded as
“learning skills avant la lettre”.

The binding is catalogued with shelf number
21179 F 15. After the presentation to the Rector
it will be digitized. The Leiden Ph.D.-thesis by
Margreet Ashmann, Collegia en Colleges
(Groningen 1990), also available in an extended
translation in German, offers many backgrounds
regarding how to dispute at Leiden University.